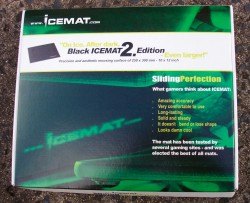 Thanks to Danny from SoftTrading for providing the Icemat for evaluation.

Today I’ll be taking a look at the Black Icemat 2nd Edition, another contender aiming to the best professional gaming mouse pad available.

The Icemat is made out of glass, and as such comes packaged in a Styrofoam box. At a price of $47.50 US, it is marginally cheaper than the Steelpad but as I will discuss shortly, every bit as good. It measures 30x25cm (12x10 inches) which I believe makes it the biggest mousepad available (if anyone can prove me wrong do let me know). Update: A viewer has informed me that the Destrukt MegaMat comes in at 17.5x14 inches
The pad also sits 6mm (1/4inch) high, with the edges rounded off. I would have preferred if the edges were sloped downwards instead, but this does not cause any major comfort issues.

The Icemat is fairly heavy and contains 6 polyurethane feet attached on the base of the Icemat, making it almost impossible to lose its grip on the table during use - much more effective than having the pad slide along the table with the mouse, which is something I tend to live with at work.

Included in the package is a 10cm (4inch) strip of padsurfers, which are Teflon based tapes that decrease friction as well as reduce noise from movement.

The reason for the black colour, is not only for aesthetics but for compatibility with optical mice. The pad is actually a glass layer on top of a black base. Although the website doesn’t state any incompatible mice, I found that there were tracking issues similar to those I experienced with the Steelpad 4S when using my old Logitech Mouseman wheel optical mouse. However, the Logitech MX series mice have been tested and proven, while the glass surface should also provide excellent traction for ball mice.

The Icemat does tend to pick up dust, which can be noticeable when the mouse runs over on the smooth, flat surface – a wipe with a cloth or sleeve can fix this problem, and the product website recommends occasional cleaning using window cleaning products.

Onto the testing and comparison: